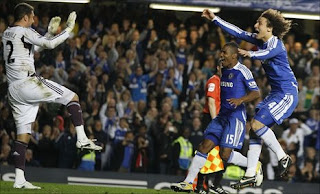 Chelsea's penalty-shootout curse ended in the most dramatic fashion as the ten-man Blues beat Fulham 4-3 on penalties after the match at Stamford Bridge ended goalless after 120-minutes. Andre Villas-Boas retained only Petr Cech and Daniel Sturridge from the side that was beaten 3-1 at Manchester United on Sunday. Oriol Romeu, Romelu Lukaku and Ryan Bertrand were handed full debuts, and Cech was asked to lead a gang that had Lampard, Terry, Didier Drogba and Juan Mata on the bench in case things veered off-message. The Portuguesewill be pleased to progress into the fourth round, but the win came at a cost. Number one Petr Cech was forced off at half-time with Ross Turnbull replacing him, whilst Alex was sent-of early on the second-half. Alex's foul allowed Pajtim Kasami the chance to score from the spot, but he fired against the bar.

Lukaku showed what a battler he could be in a 20th-minute cameo in which he barged over Matthew Briggs down the left, moved forward, then unloaded a shot that Mark Schwarzer did well to save low down. Preceding this had been a quiet opening in which the Belgian received scant service from colleagues who dominated but were only gradually stuttering into gear. The first real opportunity fell to Florent Malouda who surged from his midfield role into the area, whereupon controlling a high ball he fell to the grass when challenged by Stephen Kelly, the visiting right-back. Chris Foy failed to be tempted by the Chelsea penalty claims. After Malouda then played in Salomon Kalou to no effect, Fulham gave their neighbours an opening scare. Kerim Frei, a 17-year-old Austrian, burned beyond David Luiz but found that Alex's pace was sufficient for the Brazilian to concede the corner.

Perhaps as a precaution Cech did not emerge for the second half so Ross Turnbull was able to add a sixth Chelsea appearance to his cv. The 26-year-old had taken up his position when he was welcomed right into the game. Moments after Kalou failed to finish Lampard's weighted through-ball at one end, a Fulham attack led to Alex conceding a penalty for fouling Frei and receiving a red card. Up stepped Kasami to duel with Turnbull but an attempt with his left foot crashed off the crossbar, to his and Martin Jol's disgust. In a late flurry at the end of normal time John Terry, on for Josh McEachran following Alex's sending-off, had a header stopped superbly by Mark Schwarzer, and Ross Turnbull became his side's saviour with a flurry of saves. These included a reflex effort that prevented the Chelsea captain claiming an own goal as his manager got what he did not want – a further half hour of play.

With no further goals, the game reached the need for a shoot-out and it was Bryan Ruiz who missed the vital penalty. Frank Lampard and Fulham's Moussa Dembélé had each missed a spot-kick before the Costa Rican's penalty hit the bar and bounced down, with the visiting players claiming it had crossed the line. However, the referee, Chris Foy, ruled that it had not and Chelsea secured a victory despite having played with only 10 men for over an hour.