Lampard looks back on time as a Swan 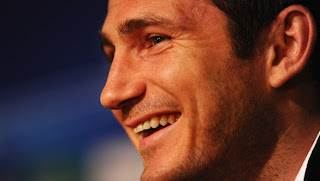 Frank Lampard has experience as a Swansea player, having had a loan spell there during the 1995-96 season, when he was at West Ham, and the England midfielder scored once in eleven appearances for the club. As a result, the fixture with the Swans, who are managed by former Chelsea reserve team coach Brendan Rodgers, will be something a little out of the ordinary for the 33-year-old. “It will be a special game for me against Swansea,” he said. “I will always have a small place in my heart for Swansea. I have always looked out for their results since then because you have that sense of attachment. And with Brendan going there, the attachment has been even more so. Swansea are my second team in the Premier League, but they won’t be when they come to Stamford Bridge.”
Email ThisBlogThis!Share to TwitterShare to FacebookShare to Pinterest