It's a Mata of team play, not just Torres 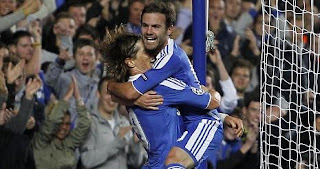 Juan Mata insists he was not bought solely to get Fernando Torres scoring but confirmed the Blues' striker did plead with him to join Chelsea this summer. Torres hailed the arrival of Spain team-mate Mata as crucial to his bid to shake off the dreadful run that has now seen him score just once in 30 games for club and country. But Mata was adamant he was not just in the side to put the ball on a plate for Torres. "My aim is to give as much as I can to the game," he said. "There are a lot of big, talented players here. As well as Fernando Torres, there are at least 20 more. I'm just one more player willing to give as much as I can when the coach puts me out there on the field." Mata did admit, however, that Torres was 'a very important factor' in his decision to join Chelsea.