Is Lampard's future in jeopardy after snub? 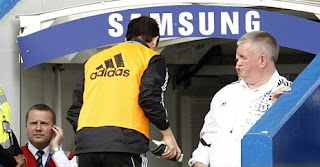 Frank Lampard's future at could be in doubt after reportedly walking away from the bench when being an unused substitute in Saturday's 4-1 win over Swansea City. Lampard, 33, has failed to make Andre Villas-Boas' starting line-up for three of the last four matches. But the game against Swansea was the first time he has not come off the bench. Villas-Boas opted to use his final substitution to bring on 18-year-old starlet Joshua McEachran for Raul Meireles in the 83rd minute for his first appearance of the season in the Premier League. Media reports suggest that Lampard then got up and walked down the tunnel without speaking to his manager.

In Lampard's only start in the last four matches he was taken off at half-time in the 3-1 loss at Manchester United. It suggests that Lampard may not figure in Villas-Boas' long-term plans after being a fixture in the Chelsea side since joining the club from West Ham United for £11m 10 years ago. Asked about Lampard's position, Villas-Boas attempted to play down suggestions that the England international's days are numbered. He said: "I don't know but this is nothing to speculate about. They are team players and the players want the team to perform, and Frank is like that. He is a fantastic player, a magnificent player and soon he will be back to the team, sooner than you expect. The decisions were mainly based on the fact we played 120 minutes on Wednesday and these players were fresh, apart from John Terry and Petr Cech. In a tight calendar like we have, it's important to have squad rotation." With Steven Gerrard returning to fitness and, when fit, Jack Wilshere a certain starter for England, Lampard's position with the national team is also under threat.
Email ThisBlogThis!Share to TwitterShare to FacebookShare to Pinterest