Injury for McEachran as he misses Israel 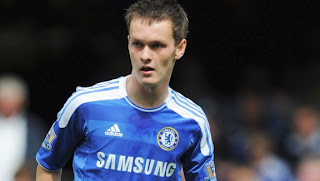 Youngster Josh McEachran has been ruled out of England’s Under 21 international against Israel with a hamstring problem. McEachran did not take part in the squad’s 6-0 home win over Azerbaijan on Thursday and has been sent back to Stamford Bridge for physio treatment. Chelsea have described the decision as a precautionary measure and McEachran could be fit to play some part in the weekend’s fixture against Sunderland. The 18 year old broke into the Chelsea first team last season and has since gone on to make four under 21 caps for England. McEachran had earlier in the season requested to go out on loan to gain more first team experience, but was told by Blues boss Andre Villas-Boas that he is definitely part of the plans at Stamford Bridge.
Email ThisBlogThis!Share to TwitterShare to FacebookShare to Pinterest