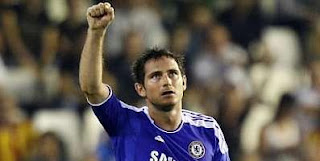 Frank Lampard insists he will not sulk if Andre Villas-Boas leaves him out of the starting line-up and is determined to end his career at Stamford Bridge. Lampard proved he still has plenty to offer with a superb performance in the 1-1 draw with Valencia, scoring his 20th Champions League goal in the process. It came just three days after it was claimed that the 33-year-old had 'stormed' off following the club's 4-1 win against Swansea having been named on the bench for the third time in four matches. Lampard is adamant he will never show disrespect to Villas-Boas, or his team-mates, even if he is rotated in the future. He told the Standard: "Storm off? I won't do that. I am very fortunate that I have had 10 years at Chelsea. I love the club, I love the fans. I feel great support from them for every moment, so the last thing I'd do when the team has played well is sulk or be happy to pick up my wages when I haven't been playing."

source: Standard
Email ThisBlogThis!Share to TwitterShare to FacebookShare to Pinterest