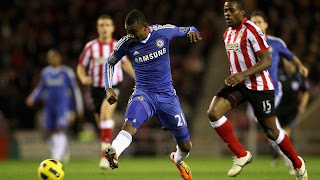 Striker Didier Drogba has been ruled out of the trip to Sunderland and is facing a race against time to make the following Premier League trip to Manchester United. Andre Villas-Boas has also confirmed the former Marseille forward will miss the Champions League clash against Bayer Leverkusen next week. Drogba's injury means Fernando Torres is likely to start his fourth Chelsea game in a row this season, which would give him the chance to get over the disappointment of being dropped from Spains matchday squad for the Euro 2012 qualifier against Liechtenstein. Chelsea are two points off the pace ahead of their trip to the Stadium of Light for a match they are expected to win. Sunderland have not beaten Chelsea on home soil in seven meetings spanning almost 11 years as they go in search of their first victory of the season.

Sunderland
Sunderland striker Asamoah Gyan is out after returning injured from international duty. The Ghana frontman damaged a hamstring in midweek and will join Republic of Ireland defender John O'Shea on the sidelines as he continues his recovery from a calf strain. However, deadline-day loan signing Nicklas Bendtner is available in the wake of his match-winning double for Denmark against Norway.

Chelsea
New signing Raul Meireles could make his Chelsea debut. Petr Cech, David Luiz and Daniel Sturridge are also in contention for a starting place at the Stadium of Light, but Didier Drogba is still recovering from a head injury. Cech is back sooner than expected from a knee problem, Luiz has recovered from a thigh complaint and Sturridge is available following his three match ban, while Michael Essien (knee) is a long-term absentee.

Facts and stats
Chelsea have won 12 of the last 13 EPL meetings between these sides, losing the other.

Nicolas Anelka has netted seven goals for the Blues in five league clashes against Sunderland.

The Blues have failed to score in each of their last two PL away games; they haven’t gone three league games on the road without a goal since April 2002.

Frank Lampard has created more chances than any other Premier League player this season (14).

This is Chelsea’s lowest-scoring start to a season since José Mourinho’s first season in charge in 2004/05.

The Black Cats are without a clean sheet in nine home league games, conceding two or more in seven of them.

This is only the second time that Sunderland have failed to win any of their opening three Premier League games (after 2005/06).
Email ThisBlogThis!Share to TwitterShare to FacebookShare to Pinterest