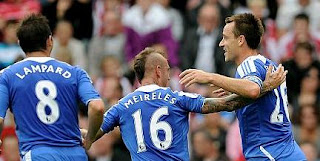 It was an afternoon when the Blues needed a win in order to keep up the Mans' (sorry Jones'!). With first starts for Juan Mata, Raul Meireles and Daniel Sturridge - and Fernando Torres on the bench - the trip to the Stadium of Light was predicted to be a very one-sided affair. Indeed it ended fruitful for Chelsea, despite a late scare. Mata looked class: the Spaniard was the creative hub of everything the Blues did, demanding the ball at every opportunity and giving a dazzling display. Goals in either half from John Terry and Sturridge sealed the victory. Sunderland's late finish from Ji Dong-Won saved total embarressment, although home fans would cling on in vague hope of a dying seconds equaliser.

Andre Villas-Boas has openly talked of the need to inject more pace and creativity and Mata granted his wish, sparking off all that was good about the London club. Chelsea and Mata started brightly but Sunderland striker Nicklas Bendtner had the first chance of the game only to glance his header wide. Apart from that, and an effort from Stephane Sessegnon strike that was beaten away by the returning Petr Cech, Chelsea dominated the first period. Nicholas Anelka smashed a shot wide after a swift break and tested Simon Mignolet with a fierce shot, while Ramires curled one wide. But it was Terry who opened the scoring - coolly finishing from Sturridge's cross as Chelsea kept piling the pressure after Mata's excellent free kick hit the woodwork. 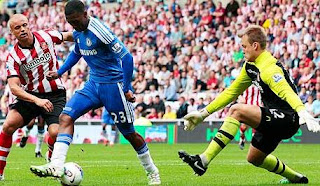 Hopes of a Sunderland revival seemed over as Sturridge scored six minutes after break. His sublime backheel finish, when running through one on one with keeper, Mignolet, made it 2-0. The game petered out somewhat after that, although substitute Florent Malouda and Anelka both had chances to extend the lead. Torres came on with twenty or so minutes remaining and there was a second debut of day when Oriol Romeu replaced Anelka shortly after. Sunderland lacked pace up front and looked powerless to prevent a second consecutive home defeat as Chelsea went on to record their 13th win in 14 games against the Black Cats despite Dong-Won's last-gasp effort. Three deserved points and still unbeaten under Villas-Boas. It does all appear to be taking shape...