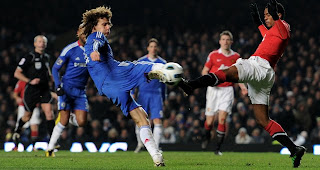 Chelsea and United have been the dominant forces in English football over the past decade but have never been prepared to stand still and there is a freshness about both sides at the start of the new campaign. While the Blues recruited a manager and several players over the summer, Sir Alex Ferguson began to build another exciting team at Old Trafford with the injection of some new blood. Chelsea's start to the season has been relatively calm, coordinated and accomplished, whilst United have been, well, rampant. The stage seems set for a truly entertaining game of football...

Manchester United
David de Gea is expected back in goal, while Ryan Giggs could also start and Rio Ferdinand is likely to return. Javier Hernandez, Ashley Young, Nani and Anderson are also in contention to come back in, although the likes of Darren Fletcher, Park Ji-sung and Antonio Valencia will all be hoping to stay in the side. Ferguson has reported no fresh injury concerns, leaving Nemanja Vidic (calf), Tom Cleverley (foot) and Rafael (shoulder) on the sidelines, whilst Danny Welbeck (hamstring) is not expected to be available until next week.

Chelsea
An investigation into comments made by Fernando Torres has been declared officially closed but the Spanish striker may still be omitted in favour of Daniel Sturridge and Nicolas Anelka. David Luiz marked his first appearance of the season against Leverkusen with a goal and is likely to stay in the side alongside skipper John Terry, who was rested on Tuesday. Branislav Ivanovic could therefore be the unlucky player to miss out, unless Villas-Boas decides to play the Serbian at right-back instead of Jose Bosingwa. Ramires is also available again following a European suspension, but Michael Essien is a long-term absentee following knee surgery. Goalkeeping understudies Hilarioand Ross Turnbull are both carrying knocks, although one will be on the bench. Didier Drogba had hoped to recover in time from a sickening head injury that caused him concussion in the 3-1 victory over Norwich on 27th August, but will not now be risked.

Facts and stats
Chelsea have won five times at Old Trafford in the Premier League era, more often than any other team

The last three Premier League meetings between Chelsea and Man Utd all ended 2-1 as did the last meeting in the Champions League
Man Utd have averaged fewer points per game at home against Chelsea than against any other opponent (1.47) and are the only team they have a lower than 50% win percentage against (37%)

Man Utd have scored in their last 32 consecutive matches at Old Trafford in the Premier League, winning 30 and losing just one of those matches. The solitary defeat was against Chelsea in April 2010