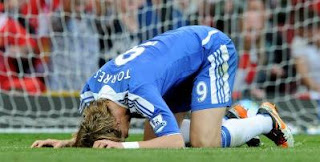 There were several things before this afternoon's game that seemed pretty certain. Despite United's steamroller of a start to the season, it was evident that Chelsea would take the game to Old trafford and test them like no other team has managed thus far (well, apart from Benfica that is). The Blues have grown stronger with each game, creating many chances along the way and an early season clash with the title holders would be a very real test of Andre Villas-Boas' selection and tactics. Also, Fernando Torres was bound to be of focus to both sets of fans and, indeed, neutrals whether he started or not. It was then no surprise that the game duely delivered, on every level, with both sides missing a hatful of opportunites. The final 3-1 result only flattered Manchester United when the outcome could have been very different...

There was one change to the side that beat Sunderland: Torres in for Nicolas Anelka and from the off, Chelsea looked to have something extra in their game. A chance came quickly for the Blues when Ashley Cole volleyed in to find Ramires at the far post, who was denied at close range by an alert David de Gea. It wasn't long before United took the lead from set play, when (an offside) Chris Smalling headed home after Jose Bosingwa had brought down the other Ashley, Young. One attempt - one goal. Typical. No matter, Chelsea where never going to take this lying down and when Bosingwa then put Anderson under pressure, and he allowed Torres to pick up the loose ball, an equaliser looked on the cards. However, after rounding the last defender he put his shot wide. The visitors were dominant though and chance after chance ensued. Bransilav Ivanovic headed strongly - although straight at de Gea - from a Juan Mata corner; Torres then set up Ramires only for him to slide and side-hit the 'keeper; Frank Lampard and Daniel Sturridge could also have found the net in the first half hour but with no avail. Nani then made it 2 with an unstoppable shot from 25 yards. Petr Cech had no chance and would have been disappointed that the Portuguese winger was allowed the space to shoot. It came against the run of play and, surprising as it was, when Phil Jones was allowed through and the mess to clear fell for Wayne Rooney to make it 3, Chelsea were all at sea. 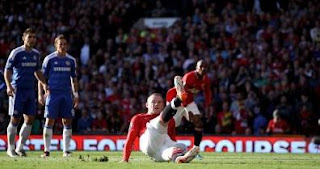 It would be Lampard who didn't appear for the second half; replaced by Anelka, and the Blues got off to a flyer after only 30 seconds. Torres, who had been excellent, latched on to a through ball from the French striker and promptly chipped de Gea. Game on at last. Chelsea continued to trouble the Reds and Mata might scored the second but had to make do with a corner. Nani then hit the woodwork and it looked like curtains for the West Londoners when Bosingwa was ajudged to have brought the midfielder down. Rooney stepped up to despatch the resulting penalty, which he put wide - his slip on contact with the ball reminiscent of John Terry's in the UCL Final three years ago. Opportunities kept coming with Jones and Ivanovic heading wide from corners at either end. Romelu Lukaku was on by now and doing what he could to carve out another chance. Rooney then got another of his own but struck the post before Javier Hernandez missed the rebound and found himself blockd by an incoming Cole. THE chance then came when Ramires put though a ball for Torres which he beautifully took beyond de Gea only to miss an open goal from about six yards! How the media will love that moment. It has to be said, that a miss from the Spaniard - at that range - will do nothing for his confidence however brilliant his performance throughout this game (and others before). So it was not to be Chelsea's day. The stats showed an enormous gulf between the sides with shots, but it was the ability to finish that provided the home team with their fifth consecutive win in the league so far.

Much will be taken and discussed but rest assured, Chelsea will only be dented by this setback. The league is long and there is an awful lot more football to be played. Fulham come to the Bridge on Wednesday for a League Cup tie which will be interesting encounter.