Drogba set to start on return from injury 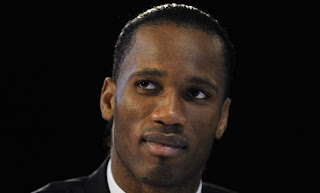 Didier Drogba is set to make his return to the Chelsea line-up for tonight's Carling Cup clash against Fulham after spending three weeks on the sidelines with a head injury. The striker is likely to partner Romelu Lukaku up-front in a new-look Chelsea side, with manager Andre Villas-Boas stating his desire to adopt a new strategy in blooding young players. "It is a different approach," Villas-Boas said. "We want to win the most amount of trophies possible, but we have taken this approach to the League Cup to promote the youngsters. We have enough good players to try to win the trophy and we will try to give opportunities to players that have been used less. It's good for us that Fulham is the challenge because it's a Premier League team, so it gives us an idea of where we are and where we stand regarding the young players that we are trying to bring through," said Villas-Boas.
Email ThisBlogThis!Share to TwitterShare to FacebookShare to Pinterest