Cole in the clear for tackle on Hernandez 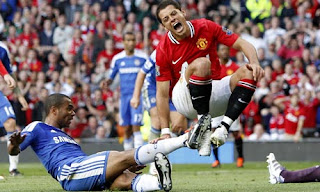 The FA today confirmed Ashley Cole would not face further action for his shin-high tackle on Javier Hernandez. Cole was booked for clattering into Hernandez as the striker shot wide in Manchester United’s 3-1 win over Chelsea yesterday. Sir Alex Ferguson claimed Cole should have been sent off, with the tackle the type of offence for which a red card is often shown. Under FIFA rules, Cole cannot be punished retrospectively because the officials took action to deal with the incident at the time. Referee Phil Dowd elected to consult with his assistant yesterday before deeming a yellow card to be a sufficient sanction. It was uncertain today how clear a view Dowd himself had of the offence, with the FA yet to receive his report from the game.
Email ThisBlogThis!Share to TwitterShare to FacebookShare to Pinterest