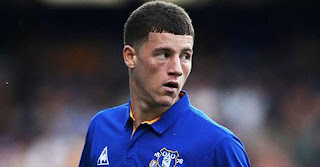 Andre Villas-Boas' bid to inject more fresh young talent into his Chelsea squad is set to lead him to bid a whopping £20m for Everton starlet Ross Barkley in January. The 17-year-old midfielder only made his Premier League debut on the opening day of this season. However, his outstanding early performances have already seen him being talked about as the next English superstar and Chelsea could be the first big club to show their hand. Moyes is trying to keep Barkley under wraps, using him sparingly and even leaving him on the bench at the weekend although his team are struggling. However, Chelsea are convinced about the teen - a discovery of super-scout Mick Doherty, who quit Everton for the west London club a few weeks ago.