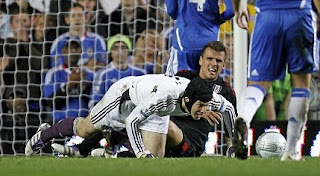 Andre Villas-Boas was confident Chelsea had avoided a goalkeeping crisis, despite Petr Cech needing hospital treatment after last night's dramatic Carling Cup victory over Fulham. Cech was forced off at half-time of the third-round tie at Stamford Bridge after suffering a head injury in a collision with Orlando Sa. Chelsea were already without understudy Hilario, meaning losing Cech left them with Ross Turnbull as their only recognised first-team goalkeeper. But after Turnbull helped his side to the penalty shootout win Villas-Boas revealed Cech had been given the all clear. "Petr went for a scan in the hospital and he's okay," he said. "He felt a little bit dizzy from the early concussion at half-time. We decided, and he decided as well, it was better not to take risks." The 29-year-old became the first high-profile goalkeeper to wear protective headgear in all matches after suffering a fractured skull in a sickening collision with Stephen Hunt at Reading five years ago.