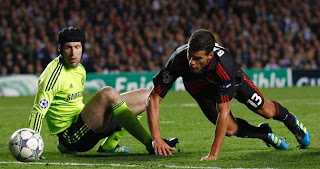 Petr Cech says he was privileged to captain Chelsea in their 2-0 win over Bayer Leverkusen on Tuesday. The 29-year-old skippered his side after John Terry was left out of the squad. Frank Lampard and Didier Drogba, who have captained the side in the past, were both not involved in the starting line-up either. It was the first time the Czech goalkeeper had been given the armband for his club in a competitive fixture, after previously leading the side in a friendly against Crystal Palace. He said: "I take it as a huge reward for my services. It is a big privilege to be the captain of one of the world's best football clubs, especially in the Champions League. It could not have come out better. I saved two chances and we won 2-0. It was a perfect game with all that it involves."
Email ThisBlogThis!Share to TwitterShare to FacebookShare to Pinterest