Cech and Luiz set to return against Sunderland 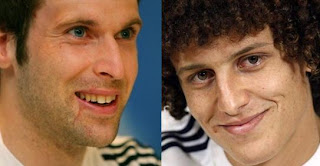 Team selection for this weekend is looking good: Petr Cech had been ruled out for between three and four weeks after damaging knee ligaments in a training-ground collision last month but has made a quicker-than-expected recovery. His replacement, Hilario, has failed to keep a clean sheet in the 29-year-old's absence, producing a horrible error to gift Norwich an equaliser in Chelsea's 3-1 win at Stamford Bridge in August. That error against Norwich capped an erratic display from Hilario, and manager Andre Villas-Boas revealed after that game that Cech 'might' be available for the Sunderland match. David Luiz also looks set to be available after missing the start of the season with a thigh injury. The defender trained after returning from international duty, during which he was an unused substitute in Brazil’s 1-0 win over Ghana at Craven Cottage on last night.
Email ThisBlogThis!Share to TwitterShare to FacebookShare to Pinterest