Cahill on radar for January move? 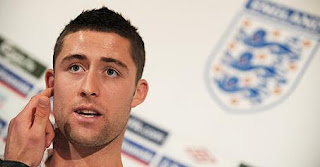 Gary Cahill believes he will reap the benefits of playing alongside skipper John Terry as he looks to establish himself as an England regular. The Bolton defender impressed in partnership with Terry on his competitive debut for his country against Bulgaria in Sofia. Cahill scored his first England goal in the Euro 2012 qualifier and hopes he has convinced Fabio Capello he should remain in the side for tomorrow's Wembley clash with Wales. The centre-back was close to joining Spurs on transfer deadline day, but a fee could not be agreed. Bolton are refusing to back down from their £17m valuation of the 25 year old and that valuation has stopped Arsenal and Liverpool this summer. But Chelsea are ready to sign and pay whatever it takes to bring Cahill to Stamford Bridge. Alex should exit Stamford Bridge in January and Cahill will, almost certainly, be the replacement.
Email ThisBlogThis!Share to TwitterShare to FacebookShare to Pinterest