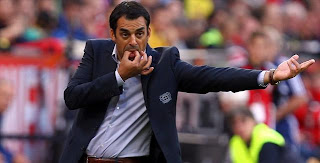 Ahead of the UEFA Champions League clash at Stamford Bridge tonight, let's take a look at our opponents and some of their danger-men, who could cause Chelsea problems. Bayer Leverkusen famously reached the final in 2002 where they beat Manchester United on the road to Hampden Park - eventually losing to Real Madrid 2-1. Most would agree that Chelsea should qualify in first position and it seems a straight tussle between Valencia and Leverkusen for second place in Group E. Last season's Bundesliga runners-up will believe they have the weapons to cause problems at Stamford Bridge.

Manager Robin Dutt arrived in the summer from SC Freiburg and the 46-year-old spent four years with the club where he made his name. He secured Freiburg’s place in the Bundesliga in 2008 and finished 14th in the before finishing in ninth last season. The Leverkusen coach was widely regarded as one of Germany’s best young coaches and Werkself will be hoping he is around at the BayArena for the long-term future. His Leverkusen side are probably one of the more flexible when it comes to tactics in the Bundesliga and their formation tends to vary between 4-2-3-1 and 4-3-1-2. It’s been an up-and-down start to the season with Leverkusen sitting in fourth place after five matches this season.

Robin Dutt’s side started off with a defeat away to FSV Mainz after a high-tempo attacking performance from their opponents. Leverkusen struggled that afternoon but individual mistakes were the killer after Goalkeeper Fabian Giefer blundered for the first goal, and then Toprak scoring an own goal. Since then, Leverkusen has won three from four matches and have conceded just one goal since the Mainz defeat. It appears Werkself have gelled at the back and are a solid outfit, backed up by their draw against Borussia Dortmund.

But who might provide the main threat against Chelsea this evening?

Michael Ballack
The former Chelsea midfielder will believe he has a point to prove after his west London release back in 2010. Previously the captain of Germany, Ballack returned to the club he helped reach the final of this competition back in 2001, and was instrumental in their domestic improvement last term. With two appearances to his name this term, Robin Dutt appears to be using the player sparingly, suggesting the powerful 34-year-old will be fit and ready for the challenge on tonight's return.

Renato Augusto
With international recognition coming the way of the 23-year-old Brazilian, the former Flamengo starlet has enjoyed a rise to prominence at the BayArena. A versatile winger who can also play in an attacking midfield position, Augusto has two assists to his name in five Bundesliga appearances so far this season, and the former Manchester City target's creativity could be key to the visitors enjoying success in London.

Andre Schurrle
One of German football's rising stars, the 20-year-old forward has four goals in eight appearances at international level, and is hoping to reproduce that form for Leverkusen after his summer switch from Mainz 05. Schurrle is yet to score for his new club though, with just five league appearances to his name following the reported €8m move. His ability is not in question though, notching 15 goals last term at the Coface Arena and eager to make his mark at the highest level domestically.

Stefan Kießling
Prolific in the 2009/10 season, Kießling enjoyed a far less successful spell last term, but has hit the ground running once again this year with two goals in five Bundesliga games. The 27-year-old, who has six caps for Germany and represented his country in the 2010 World Cup, is a 6ft 4in striker capable of posing an aerial threat to the Blues. Good in the air, Kießling also has good feet for a so-called 'big man'.

Simon Rolfes
Another German international, Rolfes has found himself at the heart of the Leverkusen midfield for six-years, and has started every game for his side so far this season. The 29-year-old anchors the midfield, potentially allowing Ballack to push forward and support the attacking pair. With an eye for goal, Rolfes has also notched 30 league goals during his time with the side currently sitting fourth domestically and unbeaten in four.
Email ThisBlogThis!Share to TwitterShare to FacebookShare to Pinterest