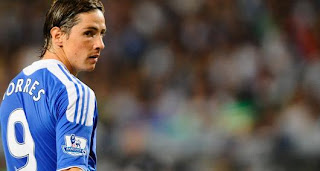 Media reports suggest that AC Milan are monitoring Fernando Torres 'situation' at Chelsea. The Italian giants could not afford to sign the out-of-form Spaniard on a permanent basis and are instead considering a loan move for the striker. The 27-year-old could be dropped for the Blues' games with Bayer Leverkusen and Manchester United this week. Torres' continuing run of bad form, and the rise of that of Daniel Sturridge, who scored during his season's debut at Sunderland on Saturday, has led Andre Villas-Boas to consider starting the youngster for Tuesday's Champions League tie with Bayer. The troubled Spanish forward has yet to complete 90 minutes for this season, finding himself substituted in the clubs first three games, and has found himself left completely out for his country.
Email ThisBlogThis!Share to TwitterShare to FacebookShare to Pinterest