Zhirkov ready for exit back to Russia 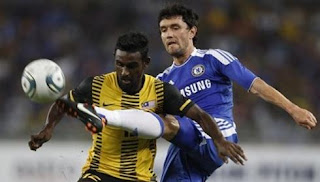 Yury Zhirkov looks set to end an unhappy two years at Chelsea by returning to Russia. The 27-year-old has been spotted at the Moscow training base of mega rich club Anzhi Makhachkala and was said to be going through a medical ahead of a £13.2m move. Zhirkov has been plagued by persistent injuries in both knees since joining Chelsea from CSKA Moscow for £18m in 2009. The Russia international struggled to find a regular spot when he was fit during Carlo Ancelotti’s reign and rarely featured in his favourite position on the left wing. Andre Villas-Boas often used Zhirkov in midfield on the pre-season tour of the Far East. But Zhirkov would struggle to gain a foothold if Chelsea win the race to sign Luka Modric from Tottenham, while Villas-Boas has also indicated he wants to give 18-year-old Josh McEachran more opportunities. Rubin Kazan, Dynamo Moscow and Zenit St Petersburg have also shown interest in Zhirkov, but sources in Russia claim a deal with Anzhi is all but agreed.