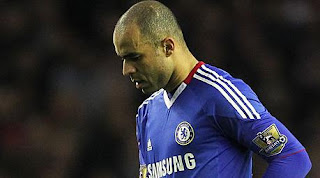 Russian side Zenit St Petersburg are believed to have made a fresh move to sign out-of-favour Brazilian defender Alex. Reports suggest that Zenit manager Luciano Spalletti has contacted Chelsea to enquire about the possibility of bringing Alex to the club. They are looking to strengthen, having won the Russian league and cup double last season, and Spalletti sees Alex as an ideal candidate due to his height and aerial ability. Alex, 29, has recently lost his place in the Chelsea starting line-up to international team mate David Luiz and he now finds himself on the fringes of the squad. He signed from Santos in 2004, but was loaned out to PSV Eindhoven for three years in order to gain a work permit. He first became known to the English public when he scored the goal that knocked Arsenal out of the Champions League in 2007, and later that year he finally returned to Chelsea to make his debut. The defender has scored some spectacular goals in his time in England, most notably against Liverpool and Arsenal, but has only made 25 league starts in the last two seasons.
Email ThisBlogThis!Share to TwitterShare to FacebookShare to Pinterest