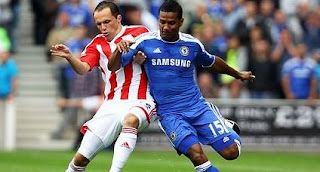 You have gotta laugh, but word on the wire now is that Arsenal representatives are to make a last minute offer for Ivory Coast striker Salomon Kalou. If the north London club are linked with any more of Chelsea's players they'll be in danger of putting out our reserves! However, Kalou has fallen out of favour at Stamford Bridge since the arrival of Romelu Lukaku, and has been told that he will be way behind Fernando Torres, Didier Drogba, Nicolas Anelka and Daniel Sturridge in the battling for starting spots in Chelsea's first team this year. Arsenal boss Arsene Wenger has long been an admirer of Kalou, and has tried to sign him twice before. However, Kalou could now be available at a cut price £10m, and Wenger is ready to thrash out a deal for the talented forward. He can have him with my blessing (I couldn't even find a decent picture).
Email ThisBlogThis!Share to TwitterShare to FacebookShare to Pinterest