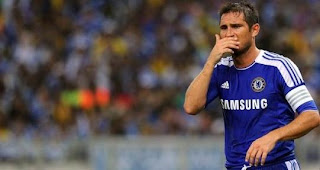 Andre Villas-Boas has admitted Chelsea could be left short of cover in midfield if injury strikes Frank Lampard again this season. Lampard was out for three and a half months last term; his absence coinciding with the Blues' worst run for almost 15 years. The England star returned to help them go close to completing the greatest comeback in Premier League history, but they ultimately came up short and finished the campaign empty-handed. Chelsea have already lost a key player before the start of this season, with Michael Essien ruled out for six months with a serious knee problem. The man signed to fill the void, Oriol Romeu, is still on international duty with Spain at the Under-20 World Cup. Chelsea have also made attempts to prise Luka Modric from Tottenham but so far without success.

Although Villas-Boas is happy with his squad going into his first competitive game in charge, he acknowledged resources could become stretched. "We are struggling with numbers in midfield," he said. "We have Oriol still away at the under-20s World Cup. He'll return late in August, so numbers are short." Sunday's game is likely to see a three-man midfield of Lampard, Ramires and John Obi Mikel, with Josh McEachran as back-up. The manager revealed he would also consider asking Yossi Benayoun or Florent Malouda to play more centrally if necessary. "It's good enough for us that the people we have can play in those positions - we have a lot of versatility in midfield," he said. "Florent Malouda and Yossi can play number eight or number ten, and that gives us flexibility. That's why we're happy with the squad running into the Stoke game. All have been playing at a high level. In midfield, everyone has been performing well."