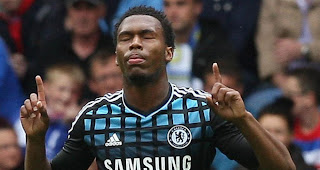 Competition for places in attack is set to be fierce at Stamford Bridge this season, with Didier Drogba, Nicolas Anelka and Fernando Torres all at Andre Villas-Boas' disposal and Romelu Lukaku set to join from Anderlecht. But it is Sturridge who has outshone his rivals with a series of impressive performances in pre-season. The 21-year-old has set his sights on playing regularly for the Blues and pushed his claims for a starting spot with a double strike in Saturday's 3-1 friendly victory over Rangers. However, he will have to be patient for a Premier League opportunity as a sending-off in the final game of last season landed him a suspension.

Terry, speaking about the match against Rangers, said: "Rangers started a little bit brighter than us and we were obviously disappointed to concede a goal. But the way we came back into it was good, Sturridge especially. He has been brilliant all pre-season. He went away last season on loan and gained from the experience of playing week in, week out. He has grown into how good he believes he can be and everyone is seeing that now. It is just unfortunate he has his three-game ban, otherwise I am sure he would have been the first name down on the team sheet because he has been brilliant so far."