Spurs will crack over Modric 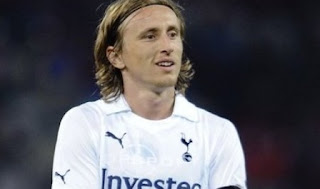 The Blues believe Spurs' stance is weakening by the day and that it is only a matter of time before Daniel Levy concedes he cannot keep Modric against his will. Chelsea are therefore set to make a third bid as a further sign of their desire to capture the 25-year-old. Andre Villas-Boas has made Modric apriority signing, with the two initial approaches seen as preparatory steps in what the club have always believed would be a drawn-out process. Feeling that Spurs' resolve is ebbing away, Stamford Bridge chiefs feel that it is now time to begin forcing the pace, in the hope a deal can be completed before the new season starts next weekend. The Blues are ready to more than treble Modric's wages to around £150,000 per week - a figure Tottenham manager Harry Redknapp knows he is powerless to match. Chelsea have latched onto the suggestions by Redknapp's assistant Kevin Bond "that everyone has a price", viewing that statement as the start of Spurs back-tracking from their previous position and that the North Londoners have put a valuation of no more than £35m on Modric.