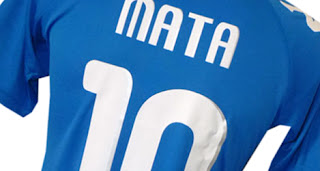 Yossi Benayoun has confirmed that Juan Mata is the new number 10 in town. The Israeli playmaker has sacrificed his number for the Spanish winger, who arrived at Stamford Bridge earlier this week. The number 10 at Valencia, Mata was set to change before Benayoun revealed on Twitter that he's happy to pass it over to the latest Chelsea addition. Suggestions are the move is a sign that the 31-year-old is preparing to leave Stamford Bridge, with claims that Chelsea were willing to offer Benayoun as part of the deal to bring in Luka Modric. Mata expressed his gratitude to Benayoun, who will now have the squad number 30, "It is a very important number to me so I'm pleased to be wearing it. I want to thank Yossi" he said and follows on from legends Joe Cole, Mark Hughes, Ian Hutchinson and Terry Venables in adopting the number 10 jersey.
Email ThisBlogThis!Share to TwitterShare to FacebookShare to Pinterest