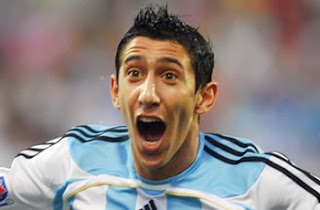 As reported here some weeks ago, it might suprise many that Chelsea are continuing to scout Real Madrid maestro Angel di Maria. With Di Maria only signing for Madrid last summer it is highly unlikely Jose Mourinho would be willing to let the Argentine leave. Having performed well for Madrid, striking up a good understanding with Cristiano Ronaldo, as well as international teammate Gonzalo Higuain, and as such, Chelsea’s initial enquiry this summer was rejected by Madrid. However, reports circulate that Andre Villas-Boas is ready to return with a bid of around £30m in order to bring in his man. Whilst Mourinho is likely to still be reluctant to sell to a Champions League rival, the fact he has already strengthened the left wing by bringing in Fabio Coentrao, and the midfield generally with several new arrivals, a large enough fee may be enough to make Mourinho, and the Madrid board, let the player move on.
Email ThisBlogThis!Share to TwitterShare to FacebookShare to Pinterest