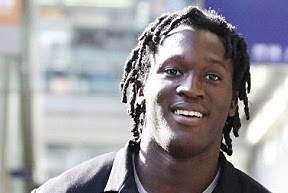 Romelu Lukaku could not contain his elation today after completing a transfer that could make him British football's second most expensive teenager. The 18-year-old striker accepted Chelsea's terms for a five-year contract and had a medical at Cobham after the club agreed to an outlay that could exceed £20m. They are paying Anderlecht £13m, with up to £6m to follow in add-ons, and are handing over £3.3m, 25 per cent of the initial fee, to Lukaku's family, in a transfer clause he negotiated with the Belgian club. In return, Chelsea are calling the shots on the publicity front and insisting that his first interview be with ChelseaTV, which is expected to be tomorrow at the earliest. The teenager did, however, briefly let his guard down; as he strode through St Pancras Station earlier this morning, he was asked to sum up his feelings by a television reporter and replied: 'This is the most beautiful day of my life.'