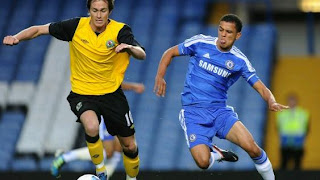 Chelsea's perfect start to the Reserve League season came to an end at Stamford Bridge on Tuesday night as they were held to a 1-1 draw by Blackburn Rovers in a repeat of last year’s national final. The Blues had the better of the 90 minutes and were most dominant in the first half, Jacob Mellis providing the opening goal after bringing down Sam Hutchinson's long through ball and firing home. A much improved Rovers responded in the second half and took a share of the spoils through Jackson Ramm’s header. Chelsea gradually recovered but could not get break down their strong defence. They could have regained the lead when Marko Mitrovic's shot was deflected onto the post. The first dropped points of the season, but a performance that will have pleased Dermot Drummy; missing a handful of key squad members who were away on international duty.
Email ThisBlogThis!Share to TwitterShare to FacebookShare to Pinterest