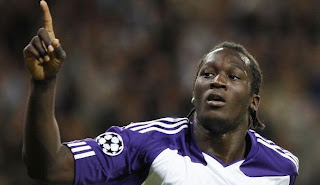 Chelsea are reportedly finally closing in on the capture of Romelu Lukaku. The Anderlecht striker has said that he is good enough to become a regular at Chelsea, if he finally completes his protracted move to West London. Chelsea have been monitoring Lukaku for some time and the Blues reportedly had an £18m offer turned down last month. The Portuguese coach looks to have given the green light to the continued pursuit and reports in Belgium suggest both Anderlecht general manager Herman Van Holsbeeck and the player's agent Christophe Henrotay are in London to finalise talks with Chelsea. Meanwhile Lukaku has spoken about the potential battle for first-team places. "I am waiting very calmly for the phone call that will tell me everything has been agreed between the clubs," he told Het Laatse Nieuws. "Anderlecht and my agent are aware that this uncertainty is not good for me or the club. They will resolve things at some point." The 18-year-old has regularly stated his desire to join Andre Villas-Boas's side, despite the fact that he would face stiff competition for a first-team place, saying: "If I'm surrounded by players better than those I'm currently playing with at Anderlecht, I have the ability to adapt quickly and raise my game."
Email ThisBlogThis!Share to TwitterShare to FacebookShare to Pinterest