Rajkovic heading to France with Valenciennes 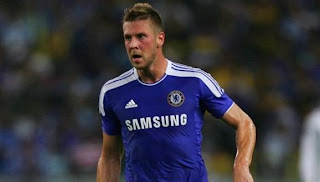 Chelsea are preparing to cut their losses on defender Slobodan Rajkovic. The Serbian may join French side Valenciennes but whether it will be on loan or a permanent deal is uncertain. The 22-year-old was signed by the club in 2005 but is still yet to make a single competitive appearance after failing to secure a work permit. The centre-half, did however, joined the Blues for pre-season training and featured in several friendly games under new manager Andre Villas-Boas. Since joining from OFK Beograd the centre-back has had three loan spells in Holland with PSV, Twente and Vitesse but is now a target for the French club. Chelsea broke the world record for a fee paid for a player under 18 when they signed Rajkovic as a 16-year-old but he is still not eligible to play in England. Valenciennes want the Serb to replace Milan Bisevac, who has left the club to join big-spending Paris St Germain.
Email ThisBlogThis!Share to TwitterShare to FacebookShare to Pinterest