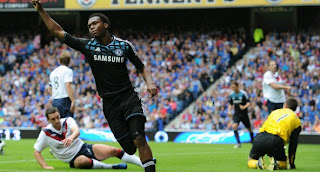 Daniel Sturridge demonstrated why Andre Villas-Boas will surely be retaining his services at Chelsea for the forthcoming season by scoring twice in a 3-1 victory over Rangers at Ibrox. After Chelsea went behind in their final pre-season friendly to a goal from Nikica Jelavic after seven minutes, Sturridge, playing wide on the right off Torres, scored with two expert finishes to put the Blues back in control of the match. The second half started quietly, but the Blues continued to dominate possession and Florent Malouda came off the substitutes' bench to make it three. Frank Lampard missed a penalty moments later as the visitors wasted a chance to make what perhaps would have been an unjust three-goal victory. In the end, though, Chelsea were worthy winners and boss Andre-Villas Boas will be happy with how his debut pre-season has gone at the helm.

It was the first goal Chelsea had conceded in seven friendlies under Villas-Boas and their response was to restrict Rangers to a handful of chances in the remainder of the first half as they began to dominate possession and take control of the game. After 22 minutes Chelsea were level as they exposed some poor defending from the home side. As the ball bounced across the face of goal, Lee Wallace lost sight of Sturridge, who was free to slam an emphatic finish high into the roof of the net. His second was even more impressive. Eight minutes later he put Kirk Broadfoot under pressure as the defender attempted to clear, robbed his opponent of possession, accelerated away and then dispatched a fine finish past Allan McGregor at the near post. Salomon Kalou also saw a curling effort tipped expertly wide by the Rangers keeper, but the half ended on a sour note for the Premier League side as midfielder John Obi Mikel was forced off due to injury, with Josh McEachran on in his place.

Rangers continued to struggle to create chances and when one failed clearance from John Terry popped into the path of summer signing Juan Manuel Ortiz, he got his finish all wrong and skewed a volley horribly off target. Chelsea also lost an element of fluency amid a flurry of substitutions, with Villas-Boas completely reworking his frontline as Florent Malouda, Didier Drogba and Nicolas Anelka replaced Kalou, Torres and Sturridge to demonstrate the wealth of options at Chelsea's disposal. After 67 minutes Drogba spun away from Broadfoot with ease and unleashed a ferocious effort that flew wide of the far post. The Ivorian then turned provider on 72 minutes as his superior speed of thought saw him flick the loose ball into the path of Malouda, who headed home from close range. Drogba generated panic again two minutes later when he flung himself to the floor to win a penalty. However, Lampard saw his spot-kick saved by substitute goalkeeper Neil Alexander, who finished the game strongly when repelling a succession of chances for the Chelsea front three.