Playmaker conundrum - will we, won't we? 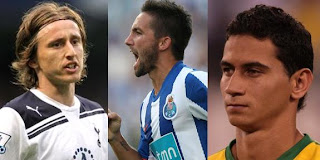 Chelsea are facing a dilemma on three of the finest playmakers with time running out and the transfer window closing in six days time. The Luka Modric saga is one that has stuck to the back pages all summer. However, andre Villas Boas is reportedly ready to offer £30m plus Yossi Benayoun and Daniel Sturridge (on loan) for the Croatian. With Tottenham Hotspur chairman Daniel Levy unprepared to sell with only a few days of the transfer window remaining, it could be that Chelsea will look to the other options more seriously.

One of those is Porto playmaker João Moutinho who, whilst younger than Modric, does not have premier league experience but could be available at a more reasonable proce of around £22m-£25m. The Portugal international has had rave reviews after their Europa League success and is a player Villas Boas would love to have back on his side however Porto are not looking to sell the creative midfielder and Chelsea will need to move fast if they want to seal the deal.

The Blues' third option is that of the young Brazilian Paulo Henrique Ganso who, at 21, has the future at his feet. He could be available for £20m although Brazilian side Santos, the same owners as alleged Chelsea target Neymar, would prefer to look at selling the young international in January; a time that may already be too late for Chelsea.

With three to choose from and only six days left to get the paperwork in order it is unclear how much pressure the board and management will feel under. Mata is certainly someone who can fill a void but as for depth, creativity in midfield is something that Chelsea are currently still lacking.
Email ThisBlogThis!Share to TwitterShare to FacebookShare to Pinterest