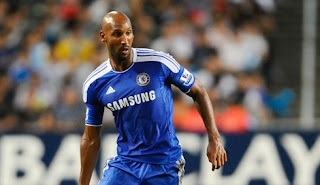 Tottenham Hotspur could be preparing a bid for Nicolas Anelka with the unhappy Frenchman wanting to quit Chelsea. The 32-year-old striker was overlooked for the first game of the season against Stoke City, with Fernando Torres starting ahead of both Anelka and Didier Drogba. New boss Andre Villas-Boas knows of Anelka's desire to leave Stamford Bridge, although he has yet to hand in a transfer request. Spurs have been linked with a number of strikers during the transfer window, and yesterday completed the sale of Republic of Ireland frontman Robbie Keane to LA Galaxy. Villas-Boas is also believed to be a big fan of youngster Daniel Sturridge, who impressed while on loan at Bolton last season and has come back to the Bridge looking to break into the first team. Anelka joined Chelsea from Bolton in January 2008 for £15m. He is one of only three players to have won the Premier League with two clubs, having clinched the title as a youngster at Arsenal.
Email ThisBlogThis!Share to TwitterShare to FacebookShare to Pinterest