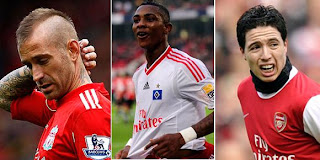 Stories suggesting that Chelsea are exploring Liverpool's Raul Meireles have surfaced again today. The Portuguese midfielder has seemingly fallen out of favour with Kenny Dalglish - he only came on a substitute during Saturday's 1-1 draw with Sunderland - and, given the club's excessive collection of central players, may now be available for transfer. Chelsea are in need of midfield creativity and have become increasungly frustrated over their attempts to sign Luka Modric from Tottenham Hotspur and with Villas-Boas acutely aware of Meireles's talents from their time together at Porto, a move for the 28-year-old does seem plausible. Liverpool will, though, want close to £12m for the player.

Another weak point with the Blues' current formation is the absence of an out-and-out winger. Since the early days of Jose Mourinho, when Damien Duff and Arjen Robben provided the 4-3-3 with much-envied width, there hasn't been a similar winger at the club. Reports in Germany suggest that Chelsea are interested in signing Hamburg winger Eljero Elia. The Dutch international has rejected the chance to move to Juventus, and the media quote him favouring a move to Chelsea. "Hamburg told me they had rejected an offer from Juventus, but I did not care", revealed Elia to the Hamburger Morgenpost. "I'm not interested in moving to a team on the same level. If we talk about Chelsea", he added, "then my reaction would be different." Interesting...

However, the biggest rumour of the day is that Chelsea are planning to hijack Samir Nasri from under Manchester City's noses. According to sources, City, who were on the verge of offering the £22m demanded by Arsenal for the French player, have been distracted by the possibility of signing Wesley Sneijder from Inter Milan. It has left Nasri in a state of limbo, especially after being subject to abusive chants during Arsenal's match against Newcastle despite him being omitted from the squad. Chelsea are desperate for a creative figure in midfield, and if they fail in their pursuit of Modric, they might make a move for Nasri.
Email ThisBlogThis!Share to TwitterShare to FacebookShare to Pinterest