Mexican to spend season on loan in Holland 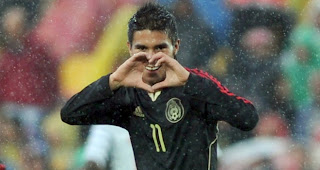 New signing Ulises Davila will spend this season on loan at Vitesse Arnhem. The 20-year-old attacking midfielder makes the move to Holland after joining the Blues on a five-year deal from Chivas Guadalajara last week. Mexican Davila marks Vitesse's second raid on Andre Villas-Boas' squad after they also signed teenage defender Tomas Kalas on loan. "He (Davila) is an open guy who will fit perfectly into our group," technical director Ted van Leeuwen told Vitesse's official website. "Ulises is very motivated to take Vitesse Arnhem to the top." Davila, who impressed for Mexico at the Under 20 World Cup this summer, is still waiting on a work permit before he can play for the Eredivisie club.