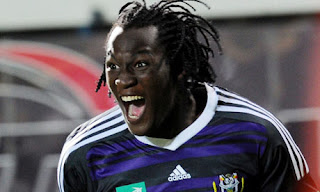 Anderlecht striker Romelu Lukaku has no desire to go out on loan if he joined Chelsea this summer. Lukaku, 18, has been tipped to sign for Chelsea during the current transfer window, with recent reports suggesting the Blues lodged a bid in the region of £18m for his signature. Chelsea captured Lukaku's Belgian compatriot Thibaut Courtois from Genk last month and subsequently loaned the goalkeeper out to Atletico Madrid. But a similar agreement would not interest Lukaku. He told Belgian TV station VTM: "When I do leave, it will not be to be loaned out as Thibaut Courtois has been. I want to go to a club where I can develop further. "It's not that I just want to be transferred to Chelsea. At the moment, I am patient. I remain at Anderlecht and I am not thinking of a transfer." Anderlecht last week denied receiving a £20m bid from Chelsea for Lukaku amid reports the general manager, Herman van Holsbeeck, had been in London for talks with the Premier League club.
Email ThisBlogThis!Share to TwitterShare to FacebookShare to Pinterest