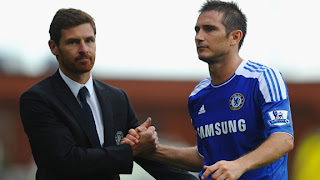 Frank Lampard believes Juan Mata can provide Chelsea with something different as they attempt to keep pace with the early-season frontrunners from Manchester. It has been suggested by some that Chelsea will struggle to hang on to the two Manchester clubs this season, especially as they have more than their fair share of older players. At 33, Lampard falls into that bracket, but he insists he is not concerned that his side are being written off already. ''It is still early in the season,'' Lampard said. ''I have seen a lot of games and, if you look at Man City, they have looked very good but went to Bolton and conceded two. Teams at this early stage of the season are quite hard to read.''

Lampard, though, is confident Spain forward Mata, signed from Valencia last week and who scored on his debut against Norwich, could prove to be a key man for his side in their bid to stay in touch. ''Everyone harks back to the days of Arjen Robben and Damien Duff, when they were running down the wings and crossing balls in,'' Lampard said. ''It is always a great weapon and, personally, I love it when we have that width because it gives you time to arrive late in the box and open teams up. That is what we have been able to do when at our best. We have other players who can do that but to see Mata do that early on, and also to slip inside playing one-twos and look so sharp, it gave us that different alternative to our play, which is great to see.''
Email ThisBlogThis!Share to TwitterShare to FacebookShare to Pinterest