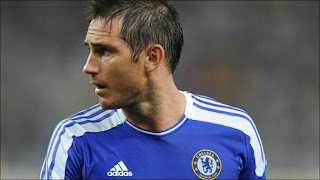 Frank Lampard will miss England's friendly against the Netherlands on Wednesday due to a throat infection. The midfielder complained of a sore throat this morning and did not train with the remainder of Fabio Capello's party. Lampard, who scored penalties in the last two Euro 2012 qualifiers against Wales and Switzerland, felt no better this afternoon and it was decided to send him back to Chelsea for treatment. He is the third England player to be ruled out for the match after Jack Wilshere and Michael Carrick, but Capello said he would not call up a replacement. Lampard will be particularly disappointed by his own absence. It was suggested last month the 33-year-old was on borrowed time with England and that Capello now viewed Wilshere as the central component of his team. It is unknown whether Lampard will be fit for the club's Premier League opener at Stoke on Sunday.
Email ThisBlogThis!Share to TwitterShare to FacebookShare to Pinterest