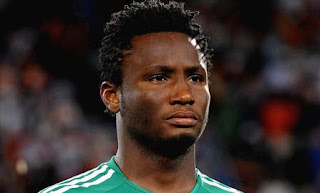 Kidnappers who abducted the father John Obi Mikel contacted his family today requesting a 20million naira (£79,000) ransom for his release, Nigerian police said. Apev Jacob, a spokesman for the local police, said they had found his father's car abandoned but did not disclose the location. Jacob gave no further details on how ransom negotiations were progressing and Mikel's family declined to comment. Mikel is understood to earn more than £60,000-a-week. The 24-year-old Nigeria international played in Sunday's English Premier League season-opening 0-0 draw at Stoke City despite knowing his father was abducted on Friday. He has publicly pleaded for his safe return. It is not the first time a relative of a Premier League player has been abducted in Nigeria, where most people live on less than £2 a day; former Everton defender Joseph Yobo's brother was kidnapped in 2008.

source: Reuters
Email ThisBlogThis!Share to TwitterShare to FacebookShare to Pinterest