Juventus step up bid for Alex 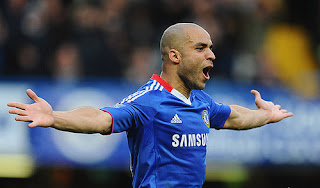 Juventus are planning to press on with an improved offer in order to lure Chelsea defender Alex away from England. According to reports, the Serie A giants made an opening bid of £7m for the player. However, Chelsea boss Andre Villas-Boas has demanded at least £10.5m for the Brazilian. Alex was linked with a move to Bayern Munich earlier this summer after the club grew frustrated in their negotiations with Manchester City over the sale of Jerome Boateng, before a deal for the Germany international was eventually agreed. Real Madrid have shown an interest since Bayern were first linked, with Los Blancos coach Jose Mourinho being the man who took him to Chelsea in 2007. Villas-Boas is believed to be prepared to offload Alex providing he can sign a new centre-back, with Bolton's Gary Cahill thought to be on his list of potential targets.
Email ThisBlogThis!Share to TwitterShare to FacebookShare to Pinterest