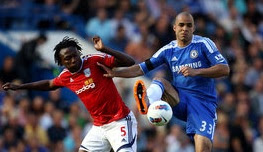 Juventus are locked in talks with Chelsea for defender Alex. Italian media says Chelsea have made the Brazilian available - but only for an outright sale - and the Italians were looking for a loan. Juve are now attempting to do business for £8m (€6m), while Chelsea are insisting on a figure nearer £10m (€8m). Juve GM Beppe Marotta won't walk away from the negotiating table and is prepared to sell some fringe players to make up the shortfall. The 29-year-old centre-back has fallen behind David Luiz in the pecking order at Stamford Bridge and has been strongly linked with a move to the Turin giants. Speaking last week, Alex said: "I am aware of Juventus' interest, and it would be a great opportunity, but I think they want to sign me on loan and this would not be a real alternative for me or Chelsea."
Email ThisBlogThis!Share to TwitterShare to FacebookShare to Pinterest