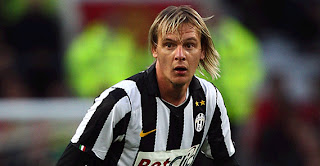 Chelsea would reportedly be prepared to sell Alex to Juventus, so long as the Italian club were willing to include Milos Krasic in any proposed deal. According to sources, Juve are desperate to land the Brazilian defender and would allow Krasic to move order to bring Alex to Turin. The Serbian international can play either wing and can fit in as a link between midfield and attack. Prior to joining Juventus he was wanted by Manchester City while Arsenal and Manchester United also made plays for him. Chelsea are known to be in the market for a creative influence in midfield and, with their pursuit of Luka Modric seemingly set to end, Krasic could be seen as an alternative to the Croatian playmaker. The one problem is that Krasic is injured at the moment and that may hamper any negotiations.
Email ThisBlogThis!Share to TwitterShare to FacebookShare to Pinterest