Juan Mata: what can we expect? 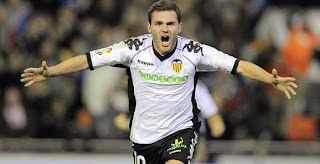 The imminent arrival Juan Mata will be the fourth addition by Andre Villas-Boas. Mata flew into the UK yesterday (Monday) for a medical at Cobham. The Spaniard will head back to Valencia today for a press conference and general farewell. Villas-Boas had previously declared an interest in Mata, and now he can finally implement the Real Madrid academy graduate into his lineup. The World Cup winner has potential to make a huge impact for the Blues. If he can adapt quickly to the style of play of the Barclays Premier League, he could be one of the biggest offensive threats around. So, what can he bring to Chelsea?

At times, Chelsea's midfield and forwards seem rushed, and as a result they give the ball away cheaply. Like other world class Spaniards, Mata has the ability to calm his team down and dictate the speed of the game. With the ability to set the pace of a match, he can pick out a killer pass. In addition, the team has lacked true wing-play: Mata has a great amount of speed and magnificent crossing ability, which will surely help players like Fernando Torres and Didier Drogba find the back of the net. With Juan Mata, you get an authentic winger and a superb one at that.

With much of the team nearing or over the age of 30, it is very important to build a team for the future and it's clear that Villas-Boas wants to inject youth into the team; Romelu Lukaku, Oriol Romeu, Thibaut Courtois and now Juan Mata. People will claim that these young players are not ready to start for Chelsea. Not so; the Spaniard has played on the biggest stages - like the latter of the UEFA Champions League - and he has gone up against some of the best teams around the world, such as Barcelona and Real Madrid. With this much experience at such a young age, Mata will scare opposing full-backs with ease.

In a lot of ways he will remind the Stamford Bridge faithful of Dutchman Arjen Robben, except he is less injury-prone, and has the uncanny ability to score and supply for his team. Juan Mata is a bit of an unorthodox winger since he can not only deliver an incisive pass, but he can also cut in and out inside the box, leave defenders confused and put the ball into the back of the net. The soon-to-be Blues winger will try to get in between the cracks of opponent defenses and help supply his teammates, very similar to another that's impressed analysts and fans recently, David Silva. Mata is just the kind of marquee signing I had hoped for and I believe he will make an immediate impact.
Email ThisBlogThis!Share to TwitterShare to FacebookShare to Pinterest