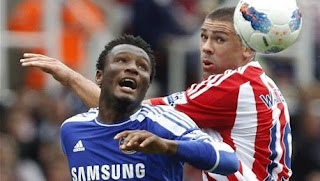 Fears are growing over the safety of Mikel John Obi's father, amid suggestions that he is being held by kidnappers in his native Nigeria. Michael Obi, who runs an inter-state transport company, has not been seen or heard from since he failed to return home from work last Friday in Jos, the capital of Plateau state. Calls to his mobile telephone apparently went unanswered before the device was unreachable from Saturday but, while no ransom demands have as yet been received, there are concerns that he has been abducted. Mikel was informed of his father's disappearance on Saturday morning and played in yesterday's draw at Stoke, with his family back in Nigeria 'hopeful' that Obi Sr will be found safe and well. "It's been tough for the young man," said the player's agent. "The family in Jos reported [Obi Sr] missing at the police station, as expected, but we're taking all necessary measures to find him. We've told John to be brave and to stay calm."
Email ThisBlogThis!Share to TwitterShare to FacebookShare to Pinterest