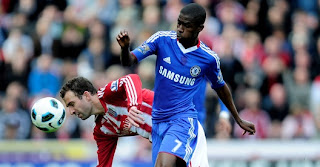 Stoke City
Tony Pulis has ruled out the possibility of Matthew Upson making his Stoke debut. The former West Ham defender, who joined the Potters this week, is not yet ready for competitive action but fellow new signing Jonathan Woodgate could feature. Stoke boss Pulis is hopeful Rory Delap (hamstring) and Matthew Etherington (rib) will overcome niggles while Ricardo Fuller, Mamady Sidibe and Danny Higginbotham are long-term absentees.

Chelsea
Fernando Torres has been passed fit for Chelsea, despite sustaining mild concussion on international duty for Spain on Wednesday. Frank Lampard is back in contention following the throat infection that ruled him out of the England squad for the aborted friendly against the Netherlands. Daniel Sturidge is suspended and Romelu Lukaku has not yet been confirmed as a Chelsea player.

Facts and stats
Chelsea fired in more shots on target (244) than any other team in the 2010-11 Premier League.

Chelsea have won their last nine opening day fixtures, the longest run of its kind since the Premier League started, and the longest such current run of any side in the four tiers of English football.

The Blues dropped fewer points from winning positions (6) than any other team in the 2010-11 Premier League.

Stoke scored 30% of their goals in the final 15 minutes of matches, a league-high proportion in that period of the game.

Chelsea have won five and lost none of the six Premier League games against Stoke.

Of all keepers to have played at least 10 PL games, Petr Cech has conceded the fewest goals per game (0.63).

André Villas-Boas lost only one away game in all competitions with FC Porto last season (v Villarreal in May).
Email ThisBlogThis!Share to TwitterShare to FacebookShare to Pinterest