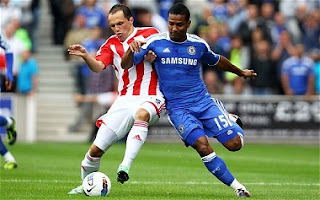 It finished goalless at the Britannia Stadium as Stoke City held Chelsea to a 0-0 draw. Stoke were the better side in the first half of a relatively open match, with Chelsea growing into the game as it went on, but both sides were unable to break the deadlock, with both defences comfortably on top. Fernando Torres and Ramires were the bright sparks for Chelsea, providing most of their creativity, but even after Drogba was brought on, Chelsea looked unable to force a clear chance. Stoke had plenty of opportunities to attack Chelsea with set-pieces, but they were well dealt with by the Blues' defence and Petr Cech.

Chelsea were looking to prove themselves under new manager, Andre Villas-Boas, while Stoke City were determined to prove that they had what it took to compete for a spot in Europe. As the match progressed, Chelsea dominated possession, while Stoke tried to break at their opponents on the counter. Unfortunately for both teams, neither side was being creative in the opposing half and failed to really test the opposing keepers. In stoppage time of the first half, Torres showed signs of his former self. The striker went on to dance his way into the Stoke area, after beating two defenders. However, just as he was about to get his final shot away, a Stoke City defender managed to get his foot to the ball and forced the striker to miss his shot.

The second half of the game kicked off in controversial fashion. In just a few minutes, Torres was brought down in the box and with everyone assuming that the referee would award a penalty, he ended up looking the other way. In the 54th minute, there was another Chelsea appeal, which didn’t get awarded. Terry headed a ball Torres, who missed his shot. However, Woodgate went on to bring the striker down and the referee should have seen that as obstruction and awarded the Blues with a penalty. Just a minute later and it yet more controversy from the referee: Lampard made his way into the box and was taken out by Marc Wilson. There was no arguing over whether that was a penalty or not, but once again, the referee seemed to miss the incident altogether. Nicolas Anelka and Salamon Kalou went close, the former having a shot tipped onto the bar by the excellent Asmir Begovic, and the latter wasting Chelsea’s best chance of the game by nodding a header straight to the Bosnian goalkeeper.

A tough start for Andre Villas-Boas, but far from a disaster. The Portuguese boss may have something to say about the number of penalty shouts Chelsea had, however, with several being waved away. Tony Pulis, on the other hand, will be pleased with his side’s display. There’s probably more to come from both of these teams - further investment is expected from both teams, and the next time these two meet at Stamford Bridge, we could see two very different sides. Chelsea are denied victory on opening weekend for the first time since 2001, against a Stoke side living up to their hard-to-beat reputation on their own patch.