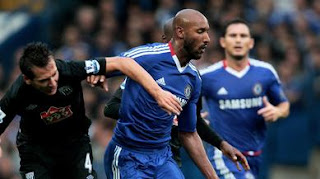 Chelsea
Peter Cech is definitely out, so either Hilario or Turnbull will deputise in the first home fixture of the season. David Luiz is expected back in around a week and Sturridge is still serving a ban. Michael Essien remains our long term absentee. Despite the disturbing situation at home, John Mikel Obi will be available to play as will newly confirmed Romelu Lukaku.

West Brom
Roy Hodgson brings his squad to Stamford Bridge with doubts over Peter Odemwingie, although Jerome Thomas is certainly sidelined. An injured Steven Reid is back to fitness. The Baggies will also look to Shane Long's excellent debut against Man Utd last week as signs of things to come.

Nicolas Anelka has scored four goals in six games against the Baggies.

The Londoners have lost just one of their last 12 Premier League games at Stamford Bridge.

The Blues dropped fewer points from winning positions (6) than any other team in the 2010-11 Premier League.

West Brom have failed to score in their last six visits to Stamford Bridge in all competitions.

West Brom have lost just one of their last six Premier League away games.

West Brom recouped more points from losing positions than any other team in 2010-11 (27).

West Brom only kept two clean sheets in the league in 2010/11, the lowest ever amount in a single Premier League season.
Email ThisBlogThis!Share to TwitterShare to FacebookShare to Pinterest