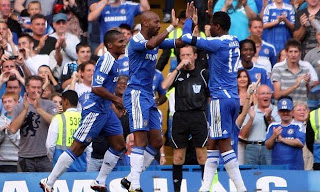 West Brom travelled to Stamford Bridge this afternoon, looking to get one over their former manager, now assistant to Andre Villas-Boas. Both teams were desperate to pick up all three points, but Chelsea were being hailed as the early favourites to come out on top. On the other hand, West Brom had looked really dangerous in their last outing against Manchester United and were going to try and go all the way against the Blues. Florent Malouda spared Villas-Boas' blushes - on his home debut as Chelsea manager - with a late winner. Malouda lost his place in the starting line-up but was brought on in the first half and came to the rescue by converting Jose Bosingwa's cross with seven minutes remaining.
However, it was West Brom who took the early lead. On 4 minutes Alex was caught sleeping, from Bosingwa's pass, and Shane Long went on to glide past him and then slot the ball into the back of the net. Hilario's first touch of the ball was to pick it out of the net. Chelsea were struggling to get in behind the visitors, who were having no such problem, with Paul Scharner testing Hilario from a tight angle. And it should have been 2-0 in the 25th minute; a brilliant Chris Brunt ball releasing Long, whose cross was too far in front of Somen Tchoyi. With only minutes remaining of the first half  Chelsea finally managed to trouble West Brom's goal. Ashley Cole went close, with a terrific shot to the top corner, forcing Ben Foster to turn behind. Moments later and the home fans screamed for a penalty when Foster clattered into Nicolas Anelka but referee Lee Mason felt the goalkeeper had got a bit of the ball. The first half ended with West Brom going into the tunnel with a surprise, but deserved, lead.
There was little to get excited about from Chelsea at the start of the second half but a slice of luck helped them equalise in the 53rd minute. Frank Lampard went down in the box laying the ball back to Anelka, who cut inside and unleashed a shot which took a deflection off and nestled in the far corner. The goal sparked the game to life, Scharner heading James Morrison's cross over the bar and Malouda seeing a half-volley blocked before Lampard played in Anelka, whose shot hit the legs of Foster and rebounded to Malouda, only for Steven Reid to throw his body at the ball. Fernando Torres was not performing as well as he did last week and, on the hour, was replaced by Didier Drogba. chelsea found an extra gear and it was Drogba who steered a Cole cross wide before Villas-Boas made his final change; Branislav Ivanovic on for Alex. Lampard and Anelka were linking up well, the latter hooking over under pressure before Drogba just failed to control a great ball from Ivanovic. Chelsea could have had a penalty when Jonas Olsson appeared to hand ball. No matter, the winner arrived when Bosingwa, skipping too easily between Morrison and Nicky Shorey down the right, produced the cross of the match, swept home by Malouda at the far post.

It was laboured at times - especially in the first half - but in the end Chelsea's resilience dominated. That brings us back to winning ways after four without maximum points, and we now have a week to prepare for the visit of Norwich City. Maybe, before then, we'll have an injection (or two?) of creativity to the midfield...