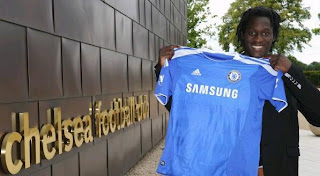 Teenage Belgium striker Romelu Lukaku declared it was a dream come true after completing his transfer to Chelsea from Anderlecht. The club has confirmed today that the deal had been finalised after the two clubs agreed a fee, thought to be between £18 m and £20m, for the highly-rated 18-year-old earlier this month. He underwent a medical at the Blues’ training ground in Cobham last week and will now be available for Saturday’s Barclays Premier League game against West Brom. A Chelsea supporter, he also visited Stamford Bridge on a school trip two years ago, and explains just how excited he is to pull on the blue shirt."Amazing. It’s a dream come true," he said. "I dreamed to play here since I was 10 years old, thinking about shaking hands with all those players like John Terry and Frank Lampard and Didier Drogba. It’s amazing to arrive here in a big club with big ambition. It was just what I was searching for."